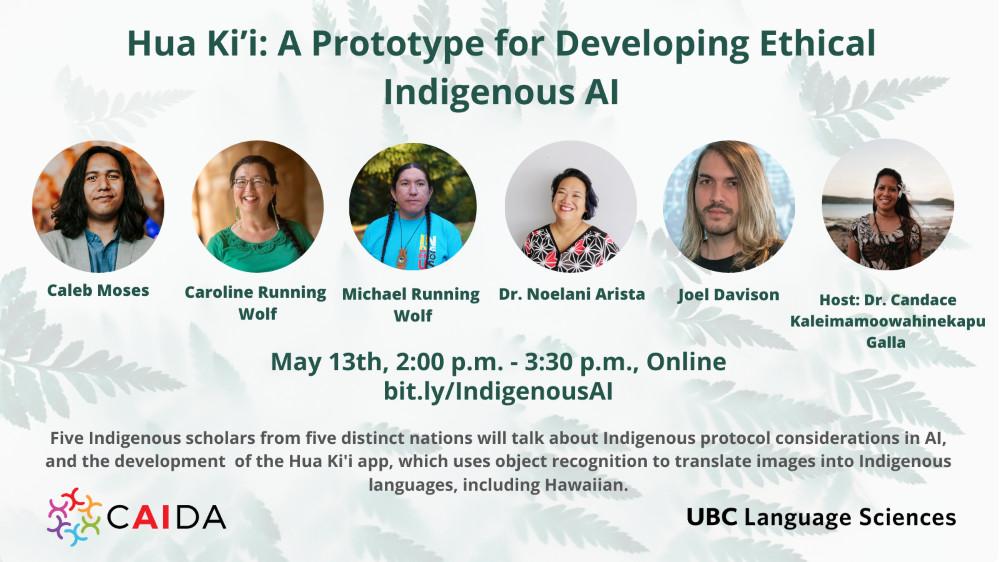 This event is co-hosted by the Centre for Artificial Intelligence Decision-making and Action (CAIDA) and the Language Sciences Initiative.

The five speakers are members of the Indigenous Protocol and Artificial Intelligence Working Group and will talk about the group's work, Indigenous protocol considerations in AI, and the development of the Hua Ki'i app, a prototype of these protocols in action which uses object recognition to translate images into Indigenous languages, starting with Hawaiian.

Caroline Running Wolf, née Old Coyote, is an Apsáalooke (Crow) Media Activist dedicated to supporting Indigenous language and cultural vitality. She was raised in USA, Canada, and Germany and considers it a privilege to now live and learn on the traditional, ancestral, and unceded Indigenous territories of the ʷməθkʷəy̓əm (Musqueam), sḵwx̱wú7mesh (Squamish), and sel̓íl̓witulh (Tsleil-Waututh) First Nations while pursuing her PhD at University of British Columbia. Caroline's PhD research explores potential applications of immersive technologies (AR/VR/XR) and artificial intelligence to effectively enhance Indigenous language and culture reclamation. She is also passionate about Indigenous data sovereignty and AI ethics.

Michael Running Wolf (Northern Cheyenne/Lakota/Blackfeet) was raised in a rural prairie village in Montana with intermittent water and electricity; naturally he now has a Master’s of Science in Computer Science. Though he is a published poet, he is a computer nerd at heart. He was raised with a grandmother who only spoke his tribal language, Cheyenne, which like many indigenous languages is near extinction. By leveraging his advanced degree and technical skills, Michael hopes to strengthen the ecology of thought represented by minority languages. In his spare time Michael pursues Indigenous language and culture reclamation using immersive technologies (AR/VR/XR), artificial intelligence, and building an automatic speech recognition system for an Indigenous language from the Pacific Northwest.

Caleb Moses (Aotearoa Māori) is a Data Scientist hailing from the Hokianga region in the far north of New Zealand. He has a Postgraduate Diploma in Pure Mathematics from the University of Auckland. His work focuses on machine learning, natural language processing, and automation. Moses is currently working with Te Reo Irirangi o te Hiku o te Ika on Papa Reo, a digital Aotearoa Māori language platform for a bilingual New Zealand.

Noelani Arista is an Associate Professor at McGill University, Department of History and Classics and is the Chair of the Indigenous Studies Program. Her areas of interest include Hawaiian religious, legal and intellectual history, Hawaiian historical methods and translation. Her current project furthers the persistence of Hawaiian language archives through digital mediums. She was a contributing author to ‘Making Kin with Machines’, an essay on Indigenous views on Artificial Intelligence, one of ten award-winning essays in the MIT competition, Resisting Reduction. Her book ‘The Kingdom and the Republic: Sovereign Hawai’i and the Early United States’ won NAISA’s Best First Book Award for 2020.

Joel Davison is a Gadigal and Dunghutti man from Sydney Australia. Living culture through an active role in language revitalisation for the Gadigal language, he is also an avid technologist and works at the Commonwealth Bank of Australia as a Robotics Analyst.